A Shot of the Past

By Lindsey DavisNovember 11, 2013 No Comments

As a visual learner, I’ve always struggled with remembering dates and time periods. I associate more with story or memory. Much like the buildings in our city, things mean more to me when I know where they came from or what they used to be. A rowhouse is a rowhouse, but when I learn it used to be an old funeral home, for example, it becomes unique and memorable.

In this light, I’ve thought much about the education of ‘things’ and the enhanced respect I glean for a place or an object when I know where it comes from. When you learn about the past, when something has a story, it demands understanding. A few months ago, I was asked to research the distilling process for a potential work project. In learning about the history of the drink, I uncovered a side of Baltimore to which I hadn’t given much thought. Beer and Boh are everywhere in this city, but there’s more to our city’s drinking past than the urban spring water we’ve long since outsourced to North Carolina.

In the 1700’s, Rye production was prominent in Pennsylvania and Maryland, where Scottish and Irish immigrants settled. Farmers found barley — the key grain ingredient for whiskeys — didn’t grow well in this soil, though rye and corn did. Bourbon — made up of at least 51 percent corn — and rye — made up of at least 51 percent rye grain — seemed the obvious choice for distillation, and since it was easier and more profitable to distill rather than ship surplus grain, rye found a new home.

In the 1900’s, industrialization accelerated and whiskey making was transported to the Susquehanna River Valley. Many of the Maryland whiskey makers vanished, but the concept of Baltimore Rye caught on. Small distilleries were established throughout Maryland, though a high whiskey tax during the Civil War made production unprofitable. By 1933 Maryland led the nation in rye production, producing 14 million gallons in one year. 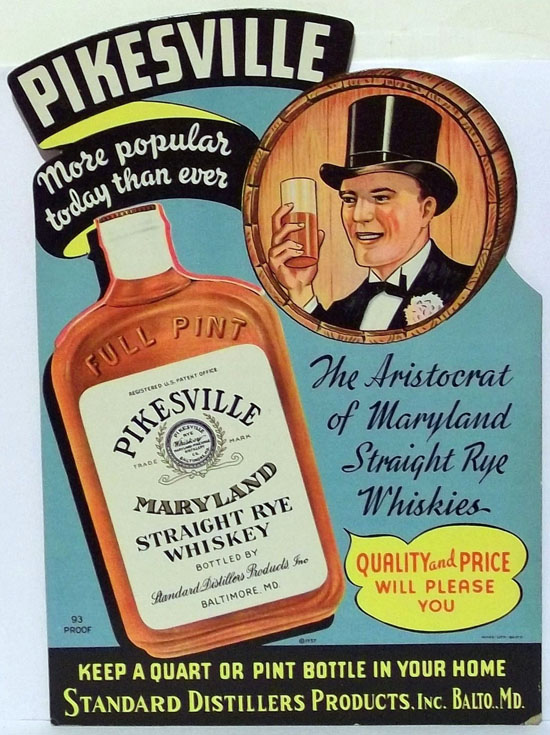 Sadly, the drink lost its luster. Alcohol was diverted for military use during World War II, and afterwards the public’s taste began to favor scotch, bourbon, Canadian blends, and gin. Many farmers moved to Kentucky where they helped sow the lands of bluegrass and bourbon. By 1972, Rye whiskeys were all but gone from bars. The president of Pikesville Rye laid down his last batch of Maryland rye at the Majestic Brewery in 1973 and told a Sun reporter he had enough rye to “last seven or 8 years.” By 1982 he had sold the building, the formula, and the remaining inventory, shifting production to Kentucky.

Perhaps the greatest transition, though, was not the geographical relocation of grains and distilleries, but the respect we show the spirits we ingest. In 1962, Sports Illustrated quoted “The exemplary behavior of Preakness patrons has been attributed to the fact that Maryland rye whisky, given a base of crab meat and fried chicken, is known to have the effect of steadying the gait, sharpening the vision and clearing the mind of all but the most kindly thoughts.” Read that. Read it again. This was before vomit and beer cans littered the infield and a fence was put up SO WE DIDN’T GET HIT BY A HORSE.

Once upon a time, there was class to the drink. So much of what was once a classic tradition has been replaced by excess — a capitalization on filling the gap of necessity with something that will get the job done quickly, giving no regard to the past, and fulfilling the need without a glimpse to the future. One could say the same about development. When it comes to cities, we know I’m a romantic — a romantic for identity and belonging, for finding a place that will hug you in all four seasons and welcome you home at the end of the day; a place that belongs, and where we belong. With better education — much like learning where we’re from, where our food was produced, and what our ancestry may be — we can live more present lives.

(With thanks to www.ellenjaye.com for a wealth of local knowledge.)

This Is Not a Photo Shoot

This Is Not a Photo Shoot

Lindsey Davis (@TheGoodPlan) fell in love with city planning through long plane rides, where diverse living and working experience sparked a heightened awareness of the relationship between space and community. Initially trained in facilitation and experiential education, she directed her passions of leadership development and place creation to better understand how design affects behavior. Lindsey holds a Masters in Public Administration and Masters of City and Regional Planning from UNC-Chapel Hill and currently works with Ayers Saint Gross.